Under large compressive forces, elements belonging to either Foams, Honeycombs and Rubbers tend to invert causing numerical instabilities. To avoid such difficulties, which is one of the primary causes of simulation waste (unusable simulation results), a good set of modeling practices are first necessary as outlined in an earlier post .

As an added protected against “Negative Volume” issues, LS-DYNA allows the definition of internal contact treatment using *CONTACT_INTERIOR specifically designed for soft materials. The only argument necessary to define the keyword is a part set consisting of soft materials that require interior contact treatment. Once the part set is determined, LS-DYNA monitors the smallest thickness dimension of each solid element in the part set checks if its value is less than Fa*Initial_Smallest_Thickness_Dimension. If the current smallest thickness dimension falls below the value, LS-DYNA applies contact forces to separate them much like in classical contact definitions. This additional force help to keep the opposing surfaces of the element away from each other to avoid element inversion problem. A graphical representation of the problem is shown below. 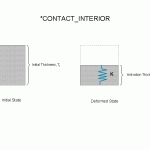 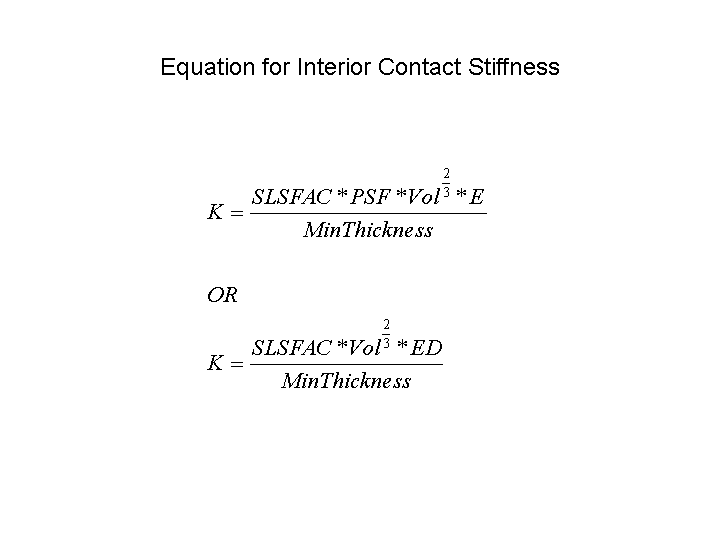 User-defined parameters for the contacts include a Penalty Scale Factor (PSF), Activation Thickness Scalefactor (FA), and the Youngs Modulus (E) used in the contact stiffness calculations. E, obtained from the material card referenced by the solid element, can be overwritten using ED. All user-defined parameters are defined using the attribute parameters in the *SET_PART keyword.

Another important parameter, TYPE, by default is set to ‘1.0’ which treats uniform compression only that fails under shear mode. It is recommended to set this option to treat a combined state by using a value of ‘2’.

Interior contact can help in avoiding negative volume problems but improper usage can lead to affecting the virgin material properties leading to non-physical normal termination problem since the interior contact can over stiffen the response.

Remarks
1. Interior contact works for both hexahedron and tetrahedron elements.
2. Do not include single surface contact (using shells that cover each solid element) and the interior contact.
3. ED can be chosen as the slope of the pressure/volumetric_strain at the largest strain value. Typical values could be of the order of 2000MPa but it
depends on the type of foam being modeled.
4. The final activation thickness depends on the elements initial dimension and FA. An aggressive FA (0.3-0.5) can overcome negative volumes but is not recommended. Recommended value of FA must not be greater than 0.15.

Limitations of Using LCSR for Strain-Rate Inclusion in MAT_024