Element count in finite element simulations are increasing faster than the â€œMoores law” used in chips. There are several reasons for this increase among which the single-model-multi-loadcase philosophy is certainly one of them. Earlier approach of building load-case-dependent models were both cumbersome, data duplication and big challenges for design change integrations. In todayâ€™s simulations, one-model is tied or integrated closely to a design data. Load-case-dependent simulations then inherit the primary or â€œmasterâ€? model and study its response under specific load conditions. One major drawback, besides its obvious advantages, is the model content overhead. A very good example is the load-case involving focused studies that is limited to a small region of the model such as head-impact analysis or pedestrian-impact analysis. Inheriting the master model for such load cases brings a huge overhead of model content whose details may have limited influence on the response. Updating the model to reduce or eliminate the undesired model contact would certainly be not recommended as this results in a deviation from the one-model philosophy. Consequently, the feature of seamless mesh coarsening in LS-DYNA for crash or NVH models is promising as it provides a very convenient way of reducing model content and the process is completely reversible by adding/removing just a few keywords.

The main keyword used to invoke the mesh coarsening feature in LS-DYNA is *CONTROL_COARSEN which has parameters such as COARSE and ANGLE. There are two type of mesh coarsening methods available in LS-DYNA, namely forming-based and crash-based. Both methods invoke the mesh coarsening routing BEFORE the initialization so a the coarsened mesh is initialized by LS-DYNA. The parameter COARSE when set to 0, skips the coarsening step and is the default option. COARSE option of 1 invokes the forming-based coarsening which was one the first implementations designed for metal-stamping applications . The motivation here was to reduce the element content after forming step so that the reduced blank model can be quickly analyzed for springback calculations. In the case of forming-based coarsening, it is assumed that a blank is free of any physical connections with other components so all elements of the part are considered as potential elements to be merged or coarsened. Also, only the adaptivity generated mesh is considered for coarsening. COARSE =2 invokes the newly implemented crash-based coarsening which differs from forming-based in the way it finds the potential elements to be coarsened. In crash-based coarsening, LS-DYNA first scans all the nodes of the elements to be coarsened to find any existing constraints such as *CONSTRAINED_{OPTION}. If a node is found be used in such definitions, it finds the attached elements and removes them from the list of potential elements to be coarsened. After looping through all the nodes, the final list of potential elements are then considered for coarsening. In both the forming and the crash based coarsening, the parameter ANGLE then determines the whether the elements can be coarsened. ANGLE (default = none), is the maximum angle between two adjacent elementâ€™s normals and if the computed angles from two adjacent element normals is within ANGLE, then they are merged. The angle between two adjacent elements are computed using their respective normals and the scalar product as shown below and when the computed angle is within ANGLE, then the elements are merged. In other words, if a circular tube is coarsened, then as a result of coarsening, the circular cross-section will tend become a lower-order polygon.

Treating Nodes Referenced by Connections
Special considerations must be taken to ensure that there is no loss of information related to connections defined on the original mesh. As mentioned above, prior to merging elements whose adjacent angle is within ANGLE, all elements connected to nodes used or referenced by *CONSTRAINED_{OPTION} will be skipped. This in some cases may reduce the overall element reduction count but is unavoidable. Parts that are connected using mesh-independent welding using a tied interface yield the maximum number of element reduction since the tied interface is initialized after the process of mesh coarsening.

Treatment of RigidBodies
Though the element count in rigidbodies do not add any noticeable computational costs, mesh coarsening on rigidbodies can be performed to improve the visualization speed if the number of elements representing a rigid body is significant. Versions of LS-DYNA prior to 971 completely ignored coarsening any rigidbodies but beginning 971, rigidbodies are coarsened just like in deformable elements except that no new adaptivity constraints are created on the rigid nodes to avoid over constraining them.

Choosing specific parts and regions to be coarsened
By default, LS-DYNA takes all parts in the model for collecting the elements to be coarsened. Optionally, the parameter PSID in *CONTROL_COARSEN can be chosen to exclude parts from being coarsened. In additional to a part set for element exclusion, a DEFINE_BOX_COARSEN can be used (with no reference to any other keywords), to define a 3-dimensional box that could enclose a certain region of the model. The parameter IFLAG can be used to further select or deselect the elements. When IFLAG is 0 (default), all elements whose center of gravity lie inside the 3-dimensional box will be excluded from being coarsened. Using IFLAG = 1, the elements outside the box will be excluded from coarsening. Both DEFINE_BOX_COARSEN and the parameter PSID can be used in combination to choose the correct region and the parts to be coarsened.

Verification of Mesh Coarsening
The most recommended method to verify that the process of mesh coarsening has not resulted in loss of information, an eigenvalue analysis can be quickly performed by setting IMFLAG to 1 in *CONTROL_IMPLICIT_GENERAL and using NEGIV in *CONTROL_IMPLICIT_EIGENVALUES to specify the number of modes. Analyzing the eigenvalues and the modes and comparing them with the original model will give confidence in the coarsened mesh.

Acknowledgments
Special thanks to Dr. Xinhai Zhu for implementing this feature in LS-DYNA and also for actively developing this. He was very instrumental in sharing some key points regarding this feature that has been included in this article. 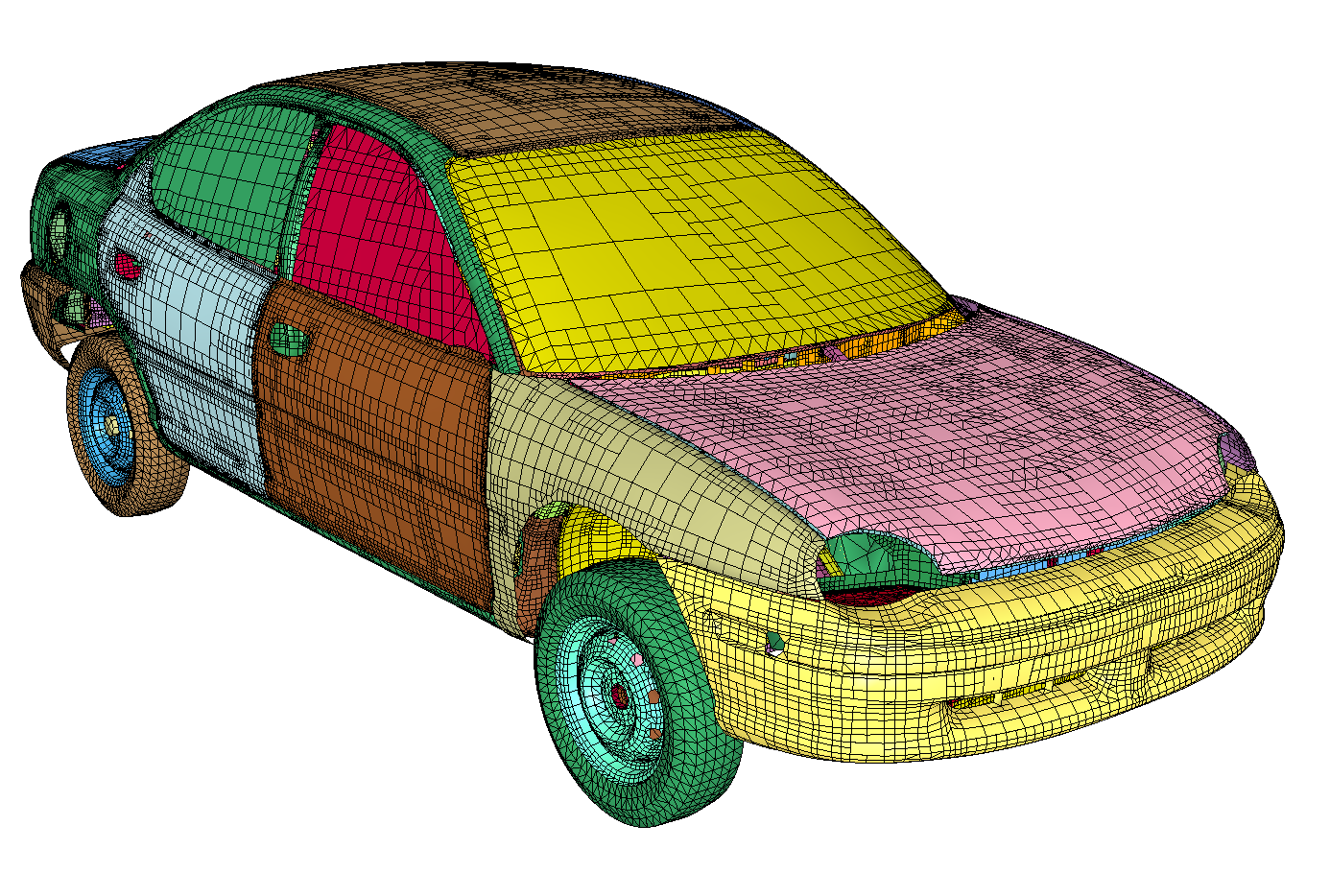